A Cluster of Parishes Working Together as One

Nestled in the Appalachian mountains of southwestern Virginia, the Holy Trinity Cluster represents the western most edge of the Diocese of Richmond. Individually, our parishes are small; however, united in a cluster of four parishes we are able to present a fuller and more unified Catholic presence in a largely non-Catholic region. Though our parishes each have a unique personality, we are all united in the mission of spreading the good news of Jesus Christ and his Church in southwest Virginia. The cluster council acts in an advisory role to the priest and the respective parishes to further Catholic unity, manage resources efficiently, and foster fruitful evangelization. We also hope to continually draw attention to our remote region as a positive asset to the Diocesan and universal Church. While we maintain our identities as individual parishes we strive to support and pray for one another and the success of this shared mission. 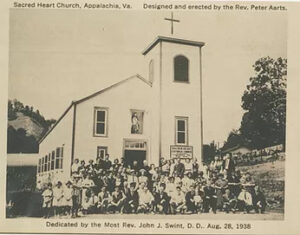 Holy Trinity Parish Cluster saw its beginnings in Lee and Wise Counties when St. Pius X (later known as Holy Spirit Catholic Community) opened as a mission of Sacred Heart in Appalachia in 1956. The Glenmary Home Missioners initially founded both of these parishes, along with the two others which would eventually unite as a cluster. When Sacred Heart was moved to Big Stone Gap in 1966 the relationship continued, as it did after the Diocese of Richmond took over both parishes in 1984. Staffed by one priest who met the pastoral needs of both communities, they shared resources while maintaining their autonomy. The priest shortage ushered in by the new millennium made it necessary to expand the service areas for priests in all sections of the diocese. It was in 2005 that Holy Trinity Parish Cluster was created with Sacred Heart and Holy Spirit joining with St. Anthony in Norton. The following year St. Joseph in Clintwood was added to the cluster.

Recognizing that they had much in common, the parishes organized around a Cluster Council, which meets on a quarterly basis for the purpose of coordinating activities and pursuing common goals. While maintaining their identities as individual parishes they strive to support and assist one another in spreading the Gospel in the far southwestern reaches of the diocese.